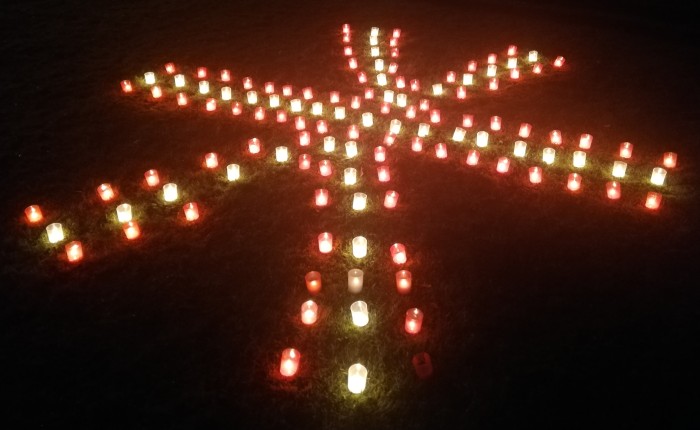 11 November for people in Britain and throughout the Commonwealth is marked as Remembrance Day. On 11 November 1918, at 11am – on the eleventh day of the eleventh month at the eleventh hour – the Armistice was signed, which began to bring the First World War to an end. The senseless deaths and slaughter of those four years of hell finally slowed and stopped. The conflict gave rise to such evocative and striking literature – the sort of writing that leaves indelible marks on the memory, and touches the soul in its direct bitterness and ghastly beauty. So Wilfrid Owen‘s Anthem for Doomed Youth:

What passing-bells for these who die as cattle?
Only the monstrous anger of the guns.
Only the stuttering rifles’ rapid rattle
Can patter out their hasty orisons.
No mockeries now for them; no prayers nor bells,
Nor any voice of mourning save the choirs, –
The shrill, demented choirs of wailing shells;
And bugles calling for them from sad shires.

What candles may be held to speed them all?
Not in the hands of boys, but in their eyes
Shall shine the holy glimmers of goodbyes.
The pallor of girls’ brows shall be their pall;
Their flowers the tenderness of patient minds,
And each slow dusk a drawing down of blinds.

Owen was himself doomed to die just seven days before the Armistice.

Here in Latvia the day is also a memorial, but it is a different, albeit related, commemoration. A year after the WWI Armistice, so on 11 November 1919, the capital, Rīga, was freed by the forces of the fledgling Latvian Republic with considerable help from British and French forces from the occupying West Russian Volunteer Army Forces led by General Pavel Bermondt-Avalov. By the end of the year, all of Latvia was free of occupying soldiers. For English speakers – the wonderful series of short films about Latvian history, atslegas.lv, tells the tale with English subtitles.

We mark the day each year with candles. Usually, the wall of Rīga Castle, where the President lives, is covered with thousands and thousands of lights.

This, usually, is the most solemn and moving of nights, as families with small children, old men with medals, uncharacteristically quiet teenagers and women in business suits all walk quietly through the streets with a sense of sacred purpose. But not this year.

This year it is different. Everything is different. Even here in Staicele, where this is one of the most moving evenings of the year, it is still and quiet, and dark. During the day we lit candles in the cemetery, and stopped to remember our own family members. And in the evening, instead of the traditional torchlight procession and candles floating in the river, it was just candles on the central green, silent “holy glimmers of goodbyes”, in Owen’s words. Just as in churches and town and village centres in Britain, where there were no Remembrance Sunday services, no Scout Parades and wreath laying ceremonies, the day passed in private thoughts and memories.

We will come back to it next year, and, it is to be hoped, for many years to come. For the words of the confession that is sometimes used on Remembrance Sunday are relevant in 2020 as they were in 1918, and 1939, and during all the terrible, dark conflicts our world has lived through.

When we fail to learn from the past : Lord, have mercy.

When we let national and personal interests blind us to the suffering of the world: Christ, have mercy.

When we forget the cost of the freedom we enjoy:  Lord, have mercy.

Merciful God, we offer to you the fears in us that have not yet been cast out by love: may we accept the hope you have placed in the hearts of all people,and live lives of justice, courage and mercy;  through Jesus Christ our risen redeemer.  Amen.