Over the last months, I have read two fascinating books, both of them outside my normal range of reading, and both partly outside my range of understanding. Both of them have ‘money’ in the title, and both are very critical of the current global monetary system, but there the resemblance ends. The Theology of Money by Philip Goodchild (Professor of Religion and Philosophy at the University of Nottingham, UK) is described as ‘a philosophical inquiry into the nature and role of money in the contemporary world’; and for someone who is not a philosopher or an economist, it’s a pretty challenging read at times. But essentially, Goodchild regards our present global monetary system, which is based on the premise that money=debt=money=credit, is irretrievably broken; that economy and ecology are mathematically incompatible; that in a capitalist system, the drive to profits will always take precedence over sustainability, and therefore economic growth is incompatible with ecological finitude; and therefore, in the end, capitalism is unsustainable. 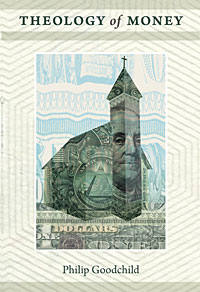 The other book, more apocalyptically entitled The Death of Money, is by a free-market economist, James Rickards, a financial wizard who has worked with the Pentagon on some fascinating projects attempting to predict security risks from market movements. His premise is also that the current global financial system is extremely fragile and built on systems of unrepayable debt bolstered by no real substance, and is likely to end in a huge upheaval something like (but probably worse than) the Great Depression on the 1930’s. Rickards also thinks it very likely that this will lead to massive social unrest, specifically in the US, which the government of the day (Republican or Democrat) will use its multiple and highly developed surveillance technologies to try and suppress. James Rickards’ blog can be found here.

What is really interesting about this is that these two highly intelligent and knowledgeable people both think that our current global financial system is close to collapse, although they come at the problem from very different viewpoints and offer radically different solutions. The theologian sees a need to deal with debt in theological terms, playing on the term often used in English for debt relief – i.e. forgiveness, and sees redemption from debt as holding the potential to bring good out of evil, and forgiveness as flowing from divine creation. The financier recommends a return to the gold standard, while acknowledging that that in itself will cause instability and hardship to many people. Strikingly, though, Rickards last words are: ‘We live in an ersatz monetary system that has reached its end stage…A return to true value based on trust is long overdue’.

In the background this summer have been equally apocalyptic images of migrants crossing the Mediterranean, and often drowning there, to leave behind lives in conflict zones, lives scarred by poverty and hatred, and seeking shelter in the perceived safety of Europe.

There have been stories from and about Calais, where thousands of migrants live in appalling conditions, in a legal limbo, hoping against desperate hope to make it to the UK, so as to rebuild their lives in a country which has not experienced war or famine in 70 years.

And year on year the pressure of the urgent messages from climate scientists and campaigners is making it clear to us all that we can expect more migration worldwide, more conflicts and wars – partly because of territory lost to desertification or rising sea levels, partly over access to water and food security. In years to come, numbers of desperate migrants are very unlikely to decrease; and whether we call the economic migrants, refugees or asylum seekers will come to seem like a complete irrelevance. They will just be people who are fleeing from the four horsemen – famine, plague, war and death.

This is how it is. For those of us who were lucky enough to be born into the almost uniquely peaceful and comfortable setting of post-WWII Western Europe, the future seems dark indeed as we look back to the light of our younger years. The question, though, is: how will we deal with this? Mostly the impending catastrophes are not within our capacity to influence, and indeed both Goodchild and Rickards make the point that in many ways today’s complex systems of governance and financial regulation are so abstruse and complex that no one really does understand how to influence them anymore.

What we can influence, though, is our own actions and reactions to the world around us – a truism of cod psychologists everywhere, but none the less true. Faced with desperate people in Calais, presented with quotas for accepting migrants, asked to accept a potential reduction in our living standards, for example – what will we do?  How will we respond here in Latvia, or indeed anywhere in Europe? That’s for Part II.